Dave Campbell's Texas Football is proud to once again roll out its 40 Under 40 — honoring the best young coaches in the state of Texas.

The Third Ward Defense was dominant in Belk’s first season as defensive coordinator. He was a semifinalist for the 2021 Broyles Award for the nation’s top assistant coach.

Clancy, who spent five years leading Houston Strake Jesuit, opened up Cain in 2017 and his Hurricanes have become an immediate contender, posting 17 wins the past two seasons and an area round playoff appearance in 2021.

The East Texas native is shifting to tight ends coach out west after previously serving as co-offensive coordinator and offensive line coach at Austin Peay.

The former Humble Atascocita DC was considered one of the bright young defensive minds in the Houston area and now he’s getting his shot to be a head coach at Dallas ISD’s lone 6A program.

After a long stint on staff at Manvel, Jasper alum Kendrick Crumedy comes home to his alma mater in 2022. Crumedy brings new energy and excitement to a potential sleeping giant in the Piney Woods.

In three seasons, Darden has been nothing short of amazing posting a 37-6 mark at Lubbock Cooper, including 5A DII state semifinal appearances in 2019 and 2021.

At just 28, DeGraffenreid has become one of six-man football’s rising stars, sporting a 43-14 overall record and leading Klondike to the state semifinals last season.

Flynn returned to his hometown in 2018 after a stint coaching in the college game and has posted a 24-19 record in four seasons leading the Deer. He’s led DPHS to the playoffs in three straight years and a district title in 2021.

Fuller, who was part of two state title teams as DC at Pleasant Grove got his chance to be a head coach at East Texas power Kilgore and delivered in year one posting an 11-2 record and a regional semifinal appearance.

Gates, a native of Shiner is the latest in a recent string of Cedar Hill assistant coaches to get his chance to be a head coach as he takes over for Courtney Allen at North Crowley.

All Gotte has done the past four seasons is start a new program at Katy Paetow, post a 35-13 record and lead Paetow to the 5A DI state title in 2021. He was named head coach at Pearland in late February.

In his first season as a head coach the former Cedar Hill DC and Pittsburg native led the Skeeters to a 7-5 mark and an area round playoff appearance, quite the turnaround from a 2-7 mark in 2020.

Johnson enters his third season as running backs coach at Baylor. Abram Smith set a school-record for rushing yards in a season with 1,601 last year.

Kinne, the son of a Texas high school football coach, gets his first shot to lead a program after a stint as co-offensive coordinator and quarterbacks coach at UCF.

Lovorn has been nothing short of sensational in seven seasons at Stratford posting a 78-21 record, he led the Elks to the 2A DII state title in 2021 and he’s guided the Elks to two other state semifinal appearances.

Marion, a record-setting college receiver in his own right, was added to the Texas staff a year after coaching the 2021 Biletnikoff winner at Pitt.

Martinez in four seasons at Natalia has posted a strong 26-19 mark including area round playoff appearances in 2019 and 2021. Natalia has made the post-season in three straight seasons under Martinez.

In three seasons, McWilliams guided the Steers to the playoffs three times and sparked steady improvement, including an area round appearance in 2020 and a 6-5 mark in 2021.

The Lufkin native spent the previous three seasons as an assistant head coach and defensive line coach at SFA. He was a four-year letterman at Oklahoma.

Miller has quietly helped Eaton become a playoff staple in DFW, posting a 32-24 record in five seasons including a trip to the Class 6A regional semifinals in 2020 and an 8-3 mark in 2021.

After five incredible seasons at Spring where he had a 41-14 record, Miller moves up I-45 to take over as the head coach at Willis for the 2022 season.

Nealy is on his third role in four years at UTEP. The former collegiate and CFL quarterback started as the Director of Player Personnel in 2018.

Paul, who cut his teeth as an assistant at Crowley, Kennedale and Duncanville, stepped into a high-profile job at Lancaster and in his first season led the Tigers to a 10-2 record and a trip to the area playoffs.

Prieto has been nothing short of sensational in his two seasons at Crosby posting an impressive 24-7 record, leading Crosby to the 5A DII championship game in 2020 and a state semifinal appearance in 2021.

Rogers who was the offensive coordinator for Cedar Park’s 2020 state runner-up squad, went to San Antonio Pieper in 2021 to start this program up that will begin varsity play in 2022.

Saincilaire in his first year as HC at Lakeview Centennial led a young Patriots squad to a 5-5 mark and had it not been for a forfeit due to a COVID outbreak, LCHS likely would have been a playoff team.

A staple at Caprock for the last eight seasons, Sherwood’s teams consistently over-achieve and they’ve made the playoffs four times, including a playoff win in 2018 their first since 1975.

Few private school coaches have been as consistent at Softley, who is 56-15 with the Eagles while guiding them to the 2019 TAPPS Division III title game.

One of six-man football’s fastest rising coaches, Stanaland is a stunning 100-49 in his career, helping one of the state’s most decorated programs re-establish its legacy.

The former Louisville quarterback was elevated to co-offensive coordinator and quarterbacks coach after spending the previous two seasons as the wide receivers coach and pass game coordinator.

Symons parlayed a successful two-year stint as the defensive coordinator at Liberty into the same role at SMU for first-year head coach Rhett Lashlee.

Teagle, a native of the Houston area, returns for his first head coaching gig at defending 5A DI champ Katy Paetow. Teagle previously served as the offensive coordinator at Denton Ryan, where he won a state title in 2020.

Torres, who opened Pebble Hills in 2016, has led the Spartans to the playoffs in four of the past five seasons and his program has produced three head coaches at other El Paso area programs in the past two seasons.

Willard in his first season at the helm at Mt. Vernon was absolutely phenomenal leading the Tigers to a 14-1 record and their second straight trip to the 3A Division I state semifinals.

A former Dallas Cowboy, Wilson has continued the winning tradition at Grapevine Faith, notching a 13-6 record in two seasons and a pair of regional semifinal appearances.

The former Muleshoe star cut his teeth as an offensive coordinator at Azle and in his third season at Snyder, the Tigers had a breakout 9-4 campaign advancing to the 4A DII regional semifinals. 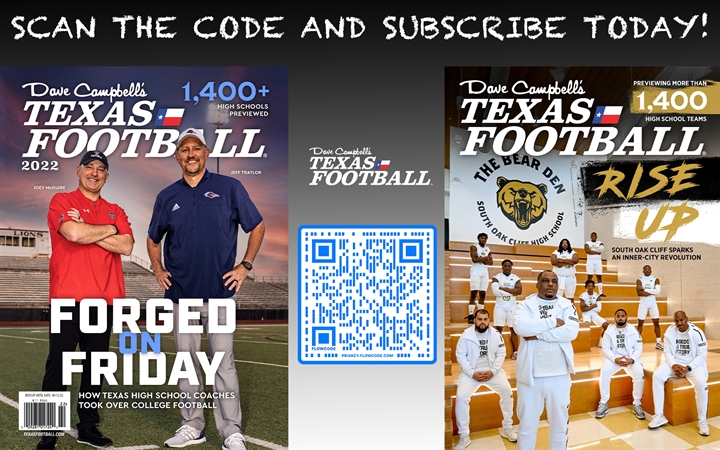