Who are the most productive receivers coming back to Texas high school football in 2022? Take a look at the best in Texas, including Corpus Christi Miller's Lonnie Adkism, Allen's Jordyn Tyson and Gilmer's Rohan Fluellen.

The answer, of course, is somewhere inbetween. Of course Rockwall quarterback Braedyn Locke benefitted by throwing to Jaxon Smith-Njigba in 2019 (4,305 passing yards, nearly half of which went to the now-Ohio State star)...but Locke also threw for another 6,836 over the next two seasons without JSN.

Perhaps that's what's so exciting and often mystifying about superstar receivers in Texas high school football — they are at the mercy of their signal-caller, yes, but they can also elevate anyone dropping back to throw them a pass.

So which teams will welcome back the most prolific pass-catchers in 2022? Here's a look at the top 10 returning receivers in UIL 11-man Texas high school football heading into the 2022 season. 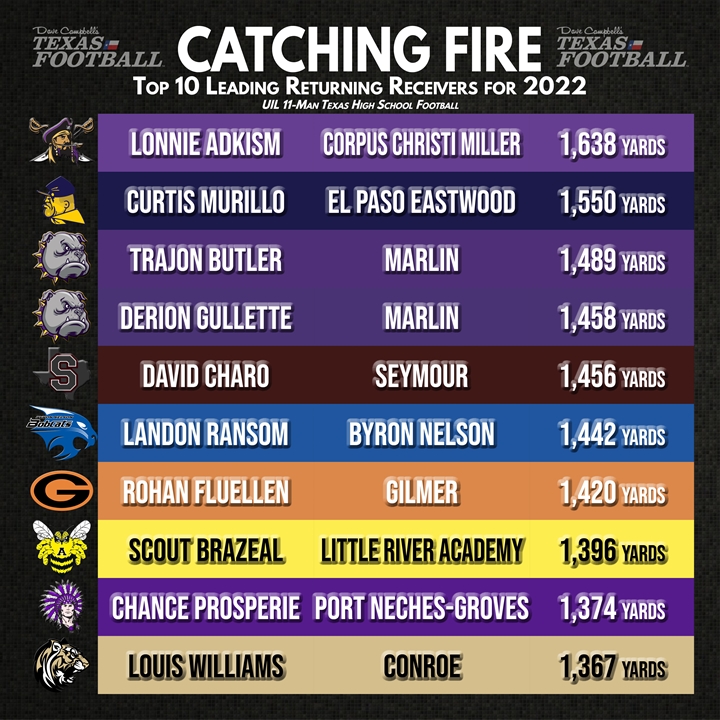 Corpus Christi Miller receiver Lonnie Adkism broke onto the scene in 2020 with a scintillating sophomore season; he followed it up with a terrific junior year; now, he'll enter his senior season as the state's leading returning receiver. Perhaps most impressive about Adkism is that he put together two outstanding seasons with two different quarterbacks — Andrew Body in 2020 and Jaedyn Brown in 2021 (who, as it happens, will also return in 2022).

Way out in El Paso, you'll find El Paso Eastwood receiver Curtis Murillo, who lit up the Sun City as a junior and could do even more damage as a senior in 2022. But there's probably no more dangerous returning receiving corps in Texas than the one that resides in Marlin, which features both the state's No. 3 and No. 4 returning receivers in Trajon Butler and Derion Gullette, respectively. And by the way? Quarterback Desmond Woodson is back as well. Watch out for the Bulldogs.

One of the state's best-kept secrets, Seymour's David Charo led Class 2A in receptions (98) last season as a sophomore, and is the sixth-most productive receiver returning this season. Landon Ransom falls into that "secret no more" category as well, as he returns as the No. 1 target for Jacob Wilson at Byron Nelson. Gilmer ran to the 4A Division II title game on the strength of big plays, and Rohan Fluellen is back for more in 2022.

Same goes for Scout Brazeal at Little River Academy, who lit it up for the Bumblebees, and Port Neches-Groves' Chase Prosperie, who returns after pacing the Indians' high-powered attack. Rounding out the top 10, you'll find Louis Williams at Conroe, who established himself as one o the Houston area's most dynamic threats as a junior in 2021.