Texas high school football offenses were pretty clearly impacted by the COVID-19 pandemic in 2020. Chalk it up to fewer practices, less strenuous workouts, a lack of 7-on-7 football, or something else — there's little doubt that scoring took a dip during that season. But with a season much closer to normal in 2021, points are back, y'all.

Of course, some teams made a bigger leap than others. Let's take a look at which teams found the biggest offensive spark from 2020 to 2021. 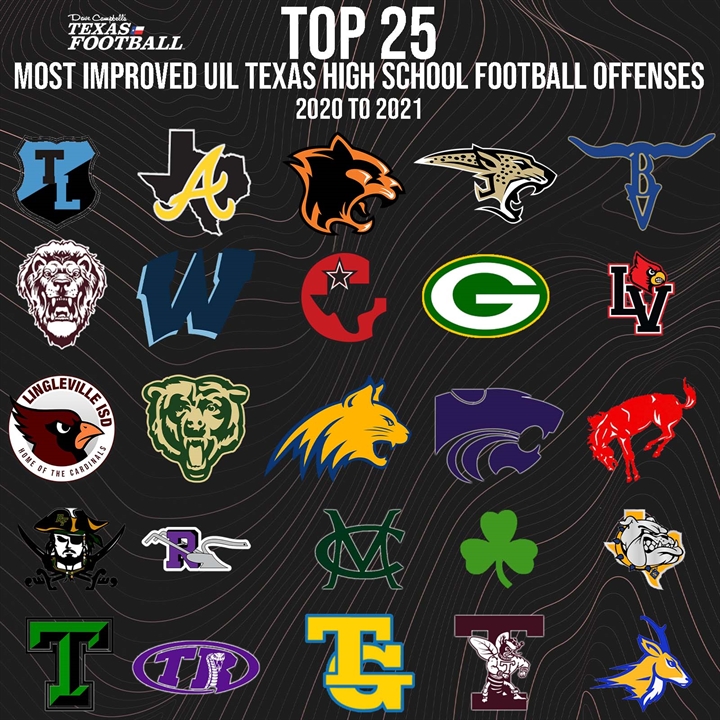 The Whiteface Antelopes made the biggest leap among all Texas high school football teams, surging from a paltry (by six-man standards) 22.3 points per contest to a robust (again, by six-man standards) 53.3 points. The emergence of District 4-1A DI Newcomer of the Year Ethan Coffman certainly helped, as did fellow freshman Jerimiah Rendon at the spreadback spot.

Mount Calm, Trent and Cranfills Gap made similar leaps in the 1A ranks, and it's not until you reach No. 5 on the list that you find our first 11-man entry in Tioga. New coach Chad Rogers, who left Denison to take over the 2A squad, certainly made his impact felt in Year One, sparking a 26.1-point surge in scoring offense. Same goes for Roscoe, as the Plowboys put together a historic season thanks to super-sophomore Jax Watts' leadership of an attack that averaged 25.5 more points this year than last.

You may notice that six-man squads dominate this list — ten of the top 25 most improved offenses play in Class 1A. With that in mind, here's the Top 25 for only 11-man UIL squads:

The smallest 11-man classification dominates here, with the top five most improved offenses all playing in 2A — Tioga, Roscoe, La Villa, Tolar and Shamrock.