The Motley County Matadors will take on the Strawn Greyhounds in the 1A Division II UIL Football State Championship at AT&T Stadium. Game time, date, preview, prediction, players to watch and key matchups.

Motley County (14-0) vs. Strawn (14-0), 2 p.m. Wednesday at AT&T Stadium in Arlington
The six-man football season in Texas will conclude with one of the most anticipated games in recent history, as unbeaten Motley County meets unbeaten Strawn. There’s been a healthy debate in the six-man world for the duration of the season as to who the best team in 1A Division II is, and the two contenders in the argument will settle it on the field in Arlington. Motley County, a state finalist from 2019, started the year ranked No. 1 and never gave any reason to budge from the top spot, throttling foe after foe with six-man football’s largest average margin of victory (50.1 points per game). All eyes will be on running back Jake Richards, who set the state single-season rushing record as a sophomore in 2019 and looks to close out his historic career with a ring, but Motley County’s defense may in fact be the superior side of the ball. They’ll get their biggest test to date against Strawn, which may boast six-man football’s most dynamic offense with Grayson Rigdon (35 TDs passing, 48 TDs rushing) and Lorenzo Garcia (30 TDs rushing) acting as the tip of the spear. Coach Dewaine Lee is no stranger to the state championship stage — after an eventful offseason that saw him leave for Aquilla only to return weeks later, he’s aiming to bring the Greyhounds their fifth title under his watchful eye. If there is a concern for Strawn, it’s on the defensive side, as they’ve been beaten up by big-play offenses in the past, so don’t be surprised if we’re in for a shootout. This is a true coin-flip game that could go either way, and will finally settle the debate of who’s the big dog in the state’s smallest classification. - Greg Tepper

RB Jake Richards - The record-smashing runner for the Matadors who set the state’s all-time single-season rushing record as a sophomore, the senior is looking to finish his career with a state championship, though he’s hardly the only weapon in coach Mike Bigham’s arsenal.

ATH Grayson Rigdon - The Rigdon name is iconic in six-man circles, and Grayson is the latest star, throwing for 35 touchdowns and running for another 48 scores. The Greyhounds are deep and dangerous, but Rigdon is by far the team’s go-to threat. 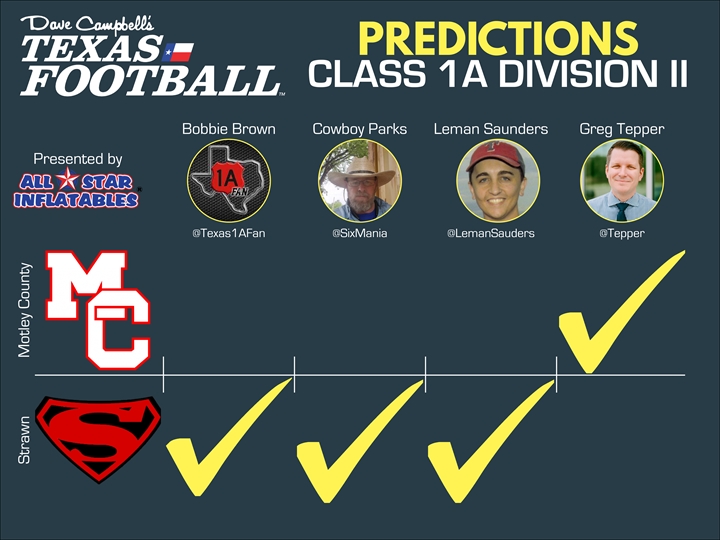