Canyon (6-1) at Pampa (6-1): District play finally gets going in 3-4A Division I and two teams with eyes on the district title meet up in Pampa, both teams are coming off a bye last week. Two weeks ago Canyon slipped past Andrews 28-26, the Eagles ran out to a 22-8 halftime lead but had to hang on late down the stretch. RB Dario Bressler led the way in the win for Canyon, running for 194 yards and two touchdowns. Pampa demolished Big Spring in their last outing two weeks ago, blasting the Steers 51-7. It was a balanced effort from the Harvesters as QB Sam Anguiano threw for 208 yards and three touchdowns, two going to WR Jesse Alvidrez. RB Cornelius Landers was as consistent as can be, running for 155 yards and two touchdowns. Canyon is the defending Region I champion, but this Pampa team has shown an explosive ability that no one else in the district has and combine that with an improved defense and I like the Harvesters in a slight upset. Stepp’s Pick: Pampa by 4

Midlothian Heritage (6-1, 2-0) at Waco La Vega (4-3, 1-1): It’s District 5-4A division I action as seventh ranked Midlothian Heritage looks to solidify their shot at a district title on the road at Waco La Vega. Midlothian Heritage continued their climb back up the DCTF rankings as they shut out Waxahachie Life 64-0. Quarterback Kaden Brown threw for 99 yards and three touchdowns, while running back Mason O’Neal had 15 carries for 126 yards and four touchdowns. The Heritage defense forced four turnovers with three of them being fumbles. It was a complete domination start to finish. Waco La Vega was able to pull out the win against Brownwood 49-33. Freshman running back Bryson Roland was a beast on the ground as he 304 yards and four touchdowns and he added in 67 yards receiving as well. Quarterback Robert Prescott threw for 272 yards and three touchdowns. La Vega has played a brutal schedule with a young squad, but they are slowly rounding into form. This game will be huge for both teams. A win for La Vega would get them closer to playoffs and a top two seed while for Heritage it is another chance to get closer to the district title, this is a coin flip type game. DCTF Intern Joshua Price’s Pick: Midlothian Heritage by 3

Fredericksburg (4-3, 1-1) at Canyon Lake (4-3, 1-1): 13-4A Division I is headlined by Austin LBJ, but the battle for second behind LBJ could come down to this one as Battlin’ Billies from Fredericksburg visit Canyon Lake. Fredericksburg kept things close early in last week’s 40-14 loss to LBJ, but they couldn’t generate any offense in the second half. QB Cole Immel and WR Kade Jenschke connected on both of the touchdowns for Fredericksburg in the loss. Canyon Lake bounced back from their close loss to Austin LBJ two weeks ago with a dominant 39-17 win over an improved Taylor squad. The Hawks Slot-T offense dominated time of possession and their defense generated six sacks of Taylor QB’s in the win. Fredericksburg is more talented than Taylor across the board, but they play a similar style and I’m not sure the Battlin’ Billies defense will be able to slow down that Hawks run-game. Stepp’s Pick: Canyon Lake by 10 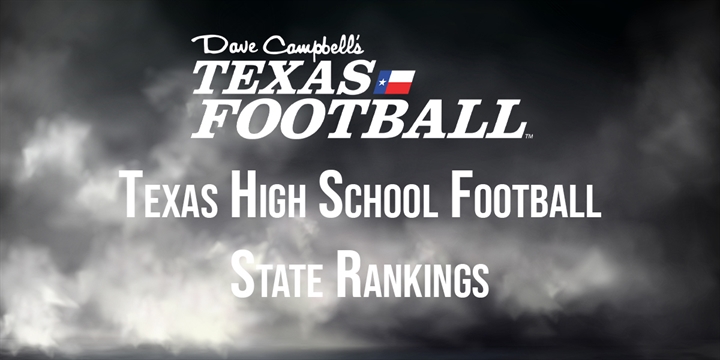 Gilmer (6-1, 2-0) at Texarkana Liberty-Eylau (5-2, 2-0): It’s a showdown in East Texas between Gilmer and a squad from Texarkana, but it’s not the team you are thinking of, it’s resurgent Liberty-Eylau. Last week Gilmer got a tougher than expected test from Pittsburg in a 26-13 win. UTSA commit QB Brandon Tennison ran for a score and threw for another, while RB Ashton Haynes had a rushing touchdown and a receiving touchdown for the Buckeyes in the win. Liberty-Eylau also got pushed a week ago, but the Leopards were able to escape with a 21-15 win over Longview Spring Hill. Trailing 15-6 in the fourth quarter, the Leopards got a pick six and a Chris Lewis touchdown reception with eight seconds left in the game to give L-E the winning margin. Liberty-Eylau’s secondary is one of the best in East Texas and they can definitely cause problems but this is a balanced Gilmer offense that can move the football on the ground with efficiency as well. Gilmer goes on the road and gets a key district win. Stepp’s Pick: Gilmer by 13

Salado (5-2, 2-0) at China Spring (7-0, 2-0): Salado and undefeated and fifth ranked China Spring will battle it out for top spot in district 9-4A Division II. Salado continued their strong start to district play as they downed an always tough Waco Connally sqiad 28-7. Salado may have been shut out in the 1st quarter but soon came alive in the second quarter with 14 points. Salado then tacked on 14 more points to seal the game. This was a very good defensive performance from the Eagles as they limited Connally to only seven points in the fourth quarter, as well as a goal-line stop and an interception. The Eagles reliable Slot-T offense got moving after their slow start in the first quarter. China Spring continued their undefeated run as they put away Gatesville 41-10. Quarterback Major Bowden set the tone for the offense as he threw for 125 yards and four touchdowns, Bowden’s also one of the state’s most dangerous running QB’s as well and his dynamic ability makes China Spring a real handful. The defense stood firm as they only allowed 48 rushing yards on 38 carries. China Spring’s defense excels at stopping the run and Salado’s scheme plays right into their hands. DCTF Intern Joshua Price’s Pick: China Spring by 10

Geronimo Navarro (5-1, 1-0) at Wimberley (5-2, 1-0): The rivalry renews as Navarro and Wimberley meet up again for the District 14-4A Division II title and there’s a decent chance this could the first of two meetings. These two have played every year since 2010 and they’ve played twice in the last two seasons, with Navarro winning both regular season meetings and Wimberley winning both playoff games. Navarro has had a week to prepare for this one after rolling past Manor New Tech 69-0 in their last outing two weeks ago. Wimberley’s offense had seen their share of struggles in non-district, but the last two weeks in district play the Texans have put up over seventy points in each game. So the question becomes, has Wimberley overcome some of their offensive inconsistency? I think the Texans have and despite Navarro having the extra time to prepare for this one, the Texans get that regular season win over the Panthers. Stepp’s Pick: Wimberley by 3

Groesbeck (6-1, 2-0) at Malakoff (4-3, 2-0): Groesbeck is rolling this season and looking to take down a powerful Malakoff squad that is much better than their record indicates. Groesbeck last week exploded for 36 second half points as they pulled away from a feisty Eustace squad 43-20. Malakoff started out the season 0-3, but the Tigers have gotten it done with defense during this four-game winning streak allowing just 21 total points in four weeks and they’ve pitched back-to-back shutouts, last week it was a 38-0 win over Teague. It’s Malakoff’s first home-game in a month so the Tigers will be amped up in front of a large crowd in a game that may decide the district title. Look for the peaking Tigers to make a major statement this week as they are gearing up for another playoff run in a tough Region II. Stepp’s Pick: Malakoff by 14

Hallettsville (6-1, 2-0) at Yoakum (5-2, 1-1): The brutal grind in 12-3A Division I continues this week as Hallettsville fresh off their second straight blowout win in district play travels over to Yoakum to take on a YHS squad still smarting after a loss to Columbus last week. It was a complete effort for Hallettsville last week as the Brahmas rolled past Boling 48-6. Yoakum fell in a heartbreaker 35-28 on the road at Columbus, the Bulldogs are clearly improved from last year where they fell twice to Columbus in lopsided losses and that gap has closed, will the same prove true against a Hallettsville squad that defeated Yoakum 42-13 a year ago? I believe that gap has closed and at home in a rivalry game, I expect Yoakum’s defense to rise to the occasion in this balanced district race. Stepp’s Pick: Yoakum by 1

: It’s the showdown in 4-2A Division I we’ve been waiting for as Cisco heads south on Highway 206 down to Coleman to take on unbeaten Coleman. Last week Cisco had no issues blasting past DeLeon 69-0 as QB Hunter Long ran for 141 yards and three touchdowns as Cisco raced out to a 48-0 halftime lead before putting in the backups for most of the second half. Cisco’s defense was lights out as well holding DeLeon ti just 69 yards of offense on the night. Unbeaten Coleman did their part to set up the showdown as well as the Bluecats raced past Goldthwaite 42-6. Jadin Jackson was the catalyst for Coleman, rushing for 104 yards and three touchdowns, while Coleman’s defense limited Goldthwaite to just under 200 yards of total offense. Coleman is vastly improved and a good team, but they haven’t faced a battle tested team like Cisco who has cut their teeth against big 3A schools in non-district. Coleman keeps it competitive but this is a Cisco squad that has eyes on a trip to Arlington. Stepp’s Pick: Cisco by 16

Johnson City (6-1, 2-0) at Mason (6-1, 2-0): Surprising Johnson City will look to make a statement against the perennial power in 14-2A Division I, the Mason Punchers. Johnson City dominated in their last outing, blasting past struggling Brackettville 58-0 as Cade Boyer had a monster night. He threw for 225 yards and five touchdowns and just for good measure he ran for 79 yards and had two receptions for 31 yards. Mason’s been their usual dominant selves in district play as the Punchers have won their first two district games by a combined 103-7 score, including a 49-7 win last week over previously unbeaten Harper. Mason is clearly the best team in this district, but if there’s one team that has the firepower to maybe make them sweat it’s Johnson City. Stepp’s Pick: Mason by 17