Sam Houston's win means the state of Texas is the first to capture a college football national championship at every level, from FBS to NJCAA, with help from Mary Hardin-Baylor, the Texas Longhorns, Texas A&M-Commerce

With one flick of the wrist on a dreary May evening, Sam Houston quarterback Eric Schmid sent the state of Texas into exclusive territory.

“The Throw” sent Sam Houston to a 23-21 win over South Dakota State for its first FCS national championship in program history. It also represented the first ever championship at the FCS level for the state of Texas.

Out of 96 players on Sam Houston’s roster, 80 of them hailed from the state of Texas.

“It just means so much when you look at guys who you played with in high school or grew up with, to see them get an opportunity to showcase their skills on the national stage,” Texas A&M-Commerce championship-winning DB Alex Shillow said. “It just showed you the caliber of football you played growing up here in Texas...it puts you in awe sometimes looking at it.”

While the lion’s share of attention is paid to the big-money programs, small college football in the state has quietly become among the best in the country. Over the past five seasons, the state has won four national championships: D-III Mary Hardin-Baylor in 2016 and 2018, D-II Texas A&M-Commerce in 2017 and Sam Houston during what will officially go down as the 2020 FCS season.

“It was really special personally to me because I’ve coached my whole career in the great state of Texas,” said Stephen F. Austin coach Colby Carthel, who led Texas A&M-Commerce to a Division II national championship. “My dad as well. We have just the utmost respect for the Texas high school coaches, and it was kind of fun to win one for them.”

Competing at the highest level across several classifications is tremendously difficult, and not just because of the recruiting talent it takes. Take Alabama for example. Every resource the state has goes into propping up Alabama and Auburn. In North Dakota, those resources go to the FCS ranks. In Minnesota, the D-IIs are well-represented. Ohio and Wisconsin do an strong job in non-scholarship Division III.

Texas features 12 FBS programs. No other state has more than seven. Texas has nine FCS programs. No other state has more than six. For a long time, the premier small college programs in the state all played in the NAIA ranks. What is now Texas A&M-Kingsville, for example, won seven NAIA national championships between 1959 and 1979. Sam Houston didn’t move to the FCS ranks until 1986. Somehow, there is still enough talent and investment to go around for several national-caliber programs.

Nowhere has that been more true than the junior college ranks. Until recently, the NJCAA had caps on out-of-state players. Getting to pull from the Texas talent pool gave Texas JUCOs a massive advantage over their peers. Navarro and Blinn combined for three national championships between 2006 and 2010.

“There are so many kids who are overlooked in some of the small towns across the state of Texas,” said Nick Bobeck, who coached Navarro to a championship in 2010. “Some of the best kids that we had at Navarro were kids who were not recruited at all.”

Everyone who watches Texas high school football knows how great these players are. The small college football world is about to learn soon – and they will come with a whole bunch of victories.

Said Fredenburg: “To see the accomplishments of the guys from Sam Houston – and obviously Coach Carthel – it’s rewarding to share the benefits of being from such a great state that really plays football at a high level.” 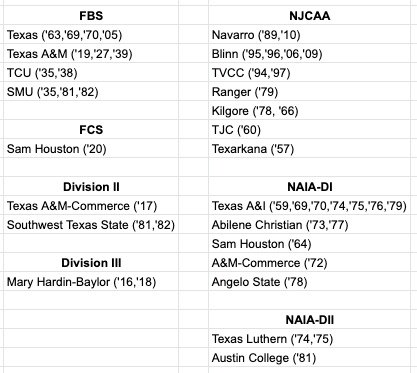