The biggest upsets in Texas high school football in 2020

Everyone loves an underdog, but these Texas high school football teams shocked the state the most, including Westbrook, North Mesquite, Reagan County and Normangee.

It's March, which means everyone's thinking about upsets. And while your brackets may lie in tatters, it gives us an opportunity to look back on the 2020 Texas high school football season and figure out who pulled the biggest shockers.

To figure this out, we dove back into the DCTF computer projections — each week, our computer projects every single Texas high school football game, available to DCTF subscribers. Then, we figured out who defied the longest odds to pull out the win.

There were stunners, there were shockers...and then there's what Westbrook did in the opening week of the season. 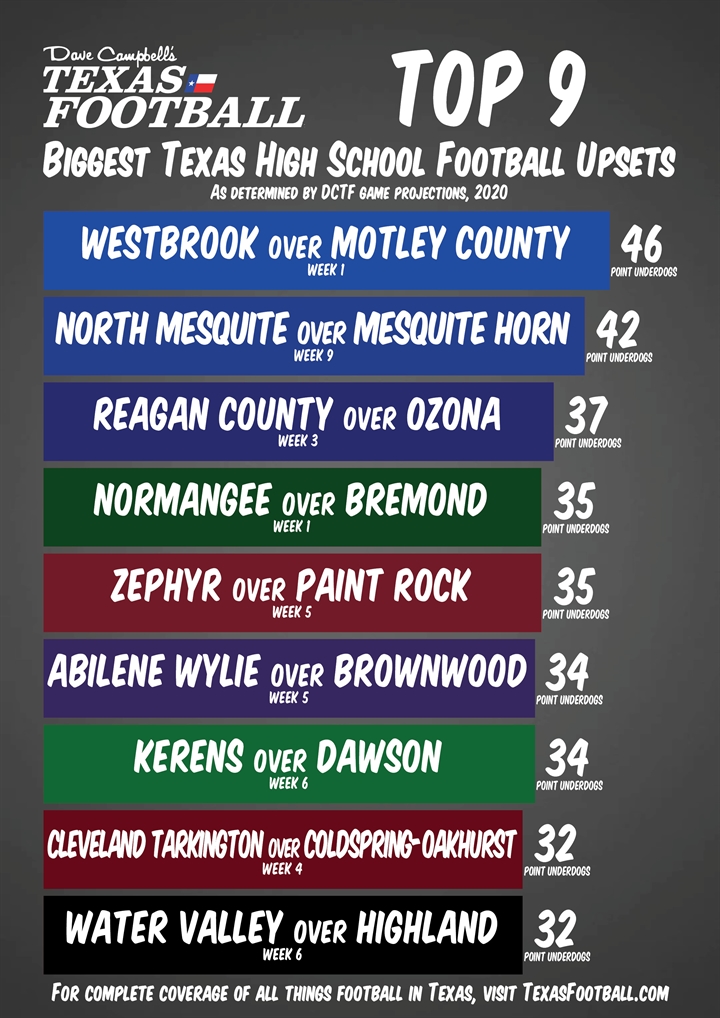 The Westbrook Wildcats top our list of the biggest upsets of the 2020 season, as they came out swinging against the defending state runner-up Motley County with a stunning 58-36 victory in the opening week of the season despite being 46-point underdogs. It's easy to see why the computer thinks this was a huge upset: Motley County was coming off a run to the title game, while Westbrook had won just six games in the previous two seasons. But coach Homer Matlock's boys began their rermarkable 2020 surge with the state's biggest shocker.

The biggest 11-man upset of the year belongs to North Mesquite, who overcame being 42-point underdogs to shock rival Mesquite Horn in the District 10-6A opener, 23-21. The Stallions, who entered the game at 1-3, took a 23-13 lead over the Jaguars in the third quarter and held on to bring home their biggest win of the season. Call it an inspired effort: it was North Mesquite's final win of the year, but one they will certainly relish.

Reagan County's Week 3 win over Ozona comes next, as the Owls got five total touchdowns from quarterback Jacob Gallegos to beat the Lions despite being 37-point underdogs. Down in Central Texas, it was Normangee who pulled off the shocker in the season opener — coach Keith Sitton's season season started off with a bang, upsetting 35-point favorite and state-ranked Bremond 29-14 and serving notice to the state that the Panthers were for real (they finished 11-1 and came within a whisker of a regional final). The same can be said for Zephyr, who was 35-point underdogs to Paint Rock in Week 5 before pulling off the 51-6 upset victory, though it must come with a very 2020 caveat: Paint Rock had been idle the previous three weeks due to a COVID-19 outbreak, so rust can certainly be blamed for part of it.

Abilene Wylie's big upset in the Big Country, toppling Brownwood in Week 5, checks in next, followed by Kerens' shocker over Dawson in Week 6. Cleveland Tarkington's victory over Coldspring-Oakhurst and Water Valley's stunner over Roscoe Highland round out the top 9. There's a five-way tie for 10th place: Rio Vista's season-opening shocker over Santo, Liberty's stunner over Madisonville in Week 2, Westbrook (remember them?) with their Week 2 win over Borden County, Buena Vista's upset over Grandfalls-Royalty, and Nevada Community's shocker over Grapevine Faith Christian were all 31-point upsets.

The biggest upset in Class 6A was North Mesquite's aforementioned victory over Mesquite Horn; the biggest surprise in Class 5A came via Abilene Wylie's win over Brownwood; Liberty's win over Madisonville was 4A's biggest stunner; Reagan County beating Ozona checks the box for 3A; Normangee's message-sending shocker over Bremond was 2A's biggest upset; and Westbrook rules the upset roost in Class 1A with their win over Motley County.

If you're interested, the biggest upsets in the postseason were: San Antonio Southwest's 32-15 area round win over Weslaco East in the 5A Division I playoffs, which counts as a 22-point upset; Alvord's 35-7 shocker over Italy in the 2A Division I area round goes in the record books as a 15-point upset; and a pair of Houston-area bi-district stunners in 6A Division I — Jersey Village's shocking 52-0 shutout of Houston Bellaire, and Klein Oak's 30-6 surprise victory over Cy Ranch — both go down as 13-point upsets.