The best regions in Texas high school football in 2020

Texas High School Football Inside The Numbers takes a look at which parts of Texas played the best Texas high school football in 2020, with nods to Carthage, Galena Park North Shore, Aledo and many more.

It's one of the hottest debates in Texas high school football every year: where is the best football in the Lone Star State played? Let's try to figure it out.

For the answer, we crunched the numbers in the DCTF computer rankings, averaging the computer rating for all UIL teams in each of the 21 regions of the state as designated by Dave Campbell's Texas Football. This is a measure of a region's strength as a whole, not the best teams in it — the top team in the region matters just as much as the bottom team in the region, so depth of quality mattters.

According to the DCTF computer rankings, if you're looking for Texas' best football, look east. 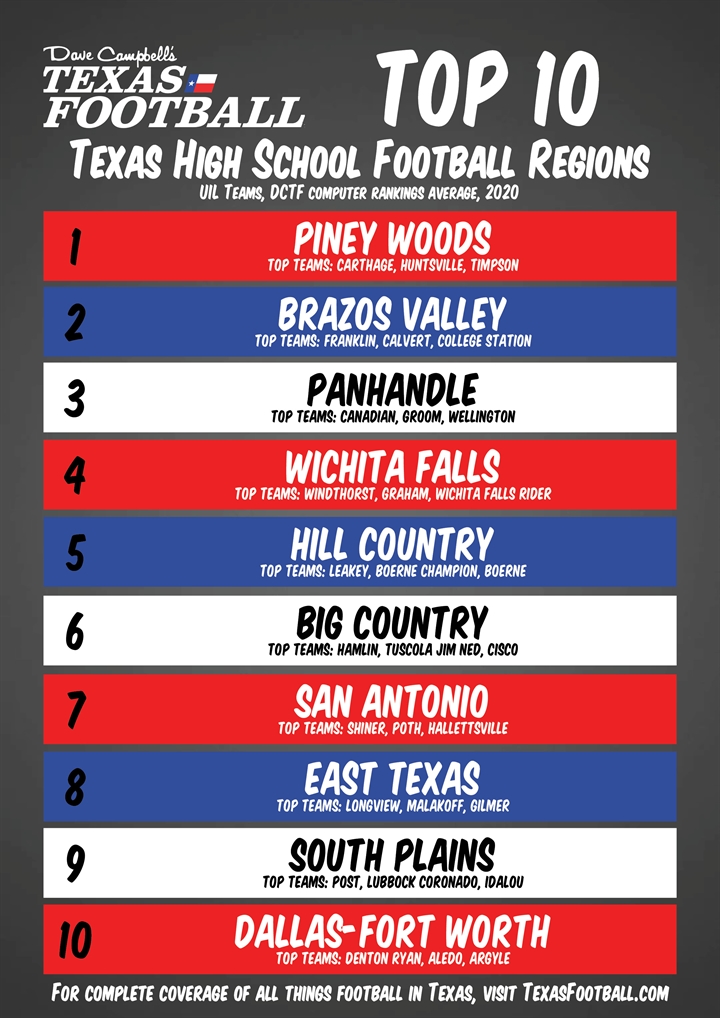 The Piney Woods reign supreme in our TXHSFB regional rankings, buoyed by arguably the best pound-for-pound team in the state in 4A Division II state champion Carthage. But it's not just the Bulldogs doing the heavy lifting: Huntsville, Timpson and Tenaha, along with Tatum and Beckville, helped buoy the Piney Woods to the No. 1 spot.

Not far behind at No. 2 sits the Brazos Valley, which is a good example of a region without a single dominant force, but outstanding depth in its place — 10 of the Brazos Valley's 23 teams finished in the top quarter of their respective classifications, including 3A DII runner-up Franklin, six-man power Calvert, and big-school powers College Station and A&M Consolidated, among others.

The Panhandle, Wichita Falls and Hill Country round out the top five, with the first two boasting state champs (3A DII champ Canadian and 2A DII champion Windthorst, respectively), while the Hill Country more than held their own, buoyed by six-man star Leakey and the Boerne schools.

The Big Country checks in at No. 6, fueled by state champ Jim Ned, while our first major metro area comes in at No. 7 in San Antonio. Surprised? Don't be — the small schools surrounding the Alamo City did a lot of the work here, with Shiner, Poth and Hallettsville leading the way, while San Antionio Reagan and Cibolo Steele were the best of the big schools.

East Texas comes in eighth, while the South Plains and the DFW metroplex round out the top 10.

Curious as to the full rankings of all 21 regions? They're below, with the top team in each region as well as the "median" team — that is, the team that ranks exactly in the middle of each region.