The most improved Texas high school football teams in 2019

In this edition of TXHSFB Inside The Numbers, we take a look at which Texas high school football teams made the biggest leaps in the 2019 season.

Coming into the 2019 season, there wasn't a whole lot to say about the Post Antelopes. Sure, they'd had some success — 21 total wins from 2015 to 2016 being the most recent highlight — but coming off of a desperately underwhelming 4-7 season the year prior in which they'd been outscored by 60 points, it was hard to feel particularly bold about the Bold Gold.

Maybe we should've. Maybe everyone in Texas should've. 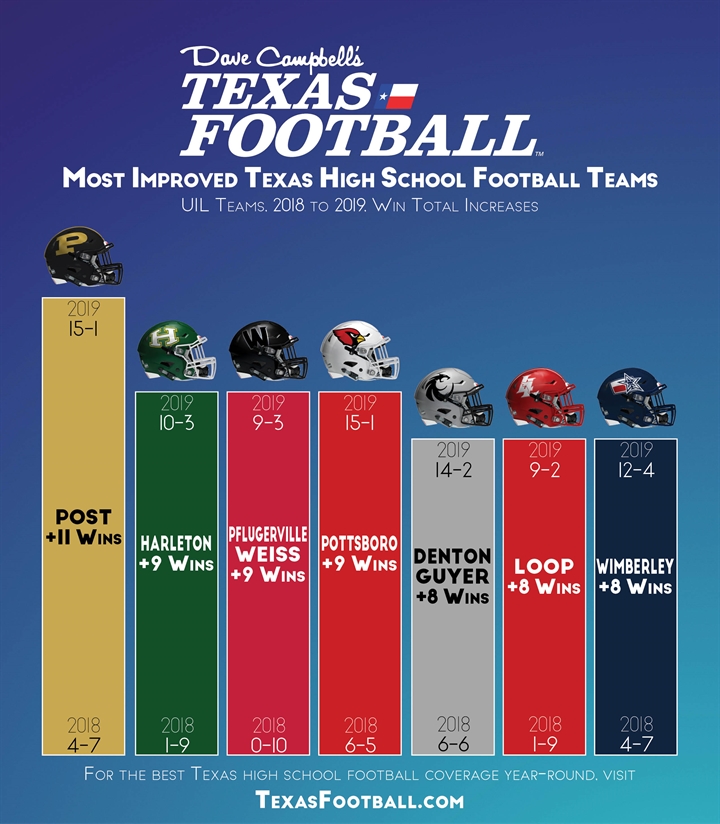 The Post Antelopes put together the most substantial leap in the win column in Texas high school football from 2018 to 2019, moving from a lackluster 4-7 season to an unforgettable 15-1 mark. The nine-win improvement sparked coach Michael Pittman's squad to the first state title game berth in program history, fueled by stars like Ashton Jefferson, Slayden Pittman and Taytem Thetford. Their win-total increase wasn't just impressive — it was a full two wins better than any other Texas high school football team accomplished last season.

Just behind the Antelopes are a trio of squads spanning across the classifications, each of whom improved their record by nine wins in 2019. The largest and newest of the bunch is Pflugerville Weiss, a second-year varsity program that went from a bad-but-not expected winless debut campaign to a thrilling 9-3 mark this season. Like Post, Pottsboro also made its first state championship game appearance, and did so by turning a 6-5 season last year into a 15-1 record this season. Last but certainly not least, first-year coach Kyle Little certainly made his impact felt at Harleton, where he turned the 1-9 Wildcats into a legitimate power, driving them to their first 10-win season since 2004.