In this edition of TXHSFB Inside The Numbers, we take a look at the stingiest defenses in 11-man Texas high school football in the 2019 season.

The climb for the Diboll Lumberjacks has been slow, but steady. After bottoming out in 2016 at 2-9, the Lumberjacks have gradually become more dangerous, to 6-4 in 2017 and 10-2 in 2018. For coach Blake Morrison's squad, a lot of that can be tied directly to an improved defense, nearly halving their defensive points allowed per game average from 29.8 in 2016 to 15.5 in 2018. 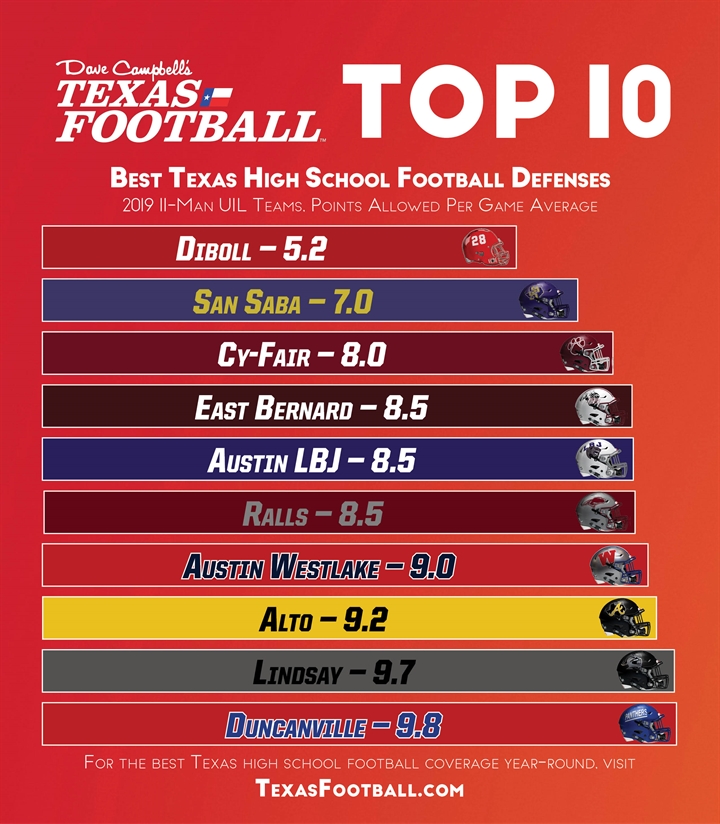 Diboll assembled the best 11-man defense in Texas high school football in 2019, allowing a mere 5.2 points per game in their breakout 11-1 season — the Lumberjacks' second undefeated regular season in program history, and its first sice 2000. The Lumberjacks had one of 3A's most fearsome front sevens, led by LBs Hayden McLeroy and Chase Tamez, and DLs Herbert Gums, Jeremiah Gums and Hezekiah Freeman. That's not to say their secondary was any easier to beat: the Lumberjacks put all four DBs on the District 11-3A DI all-district team in Jorrin Thompson, Tyveon Williams, Jermiah Setter-Watts and Jaylon McMillan. All told, Diboll pitched five shutouts (technically six, though Buna scored on a safety in their bi-district playoff matchup) and held 10 of its 12 opponents to single-digit point totals.

Not far behind them, San Saba's defense was among the fiercest in all of the state, allowing just 7 points per game. While QB Sean O'Keefe and RB Eli Salinas got a lot of deserved headlines, it was the Armadillos' defense that was arguably more dominant, leaning on LB Risien Shahan, DL Jett Hibler and DB Jake Faught to hold opponents in check all year. Ten of the Armadillos' 14 opponents failed to crack double-digit points, including six shutouts.

Traditional defensive standout programs follow close behind in Cy-Fair (8.0 points allowed per game), East Bernard (8.5) and Austin LBJ (8.5). The rest of the top 10 includes small-school powers (Ralls, Alto and Lindsay) and 6A powerhouses, including 6A DII champion Austin Westlake (9.0) and 6A DI runner-up Duncanville (9.8).

Cy-Fair was the most dominant defense in Class 6A; Austin LBJ was 5A's best defense; in 4A, the defensive crown belonged to Sealy (12.6 points per game), edging out West Orange-Stark for the honor; 3A's top defense was Diboll; and San Saba had the best scoring defense team in 2A.