In this edition of TXHSFB Inside The Numbers, we take a look at the highest-scoring attacks in 11-man Texas high school football in the 2019 season.

Before the season, Humble Atascocita coach Craig Stump told Texas Football that he thought his Eagles had a chance to be even stronger in 2019 than they were in 2018. That's quite a statement, considering Atascocita went 11-2 a year ago, including an 8-0 district championship run. But there were elements that had coach Stump excited — most notably, nine starters back on offense, including quarterback Brice Matthews, a pair of standout receivers in Dylan Robinson and Darius Edmonds, and a strong offensive line anchored by Will Jones.

It appears that Stump knew what we was talking about. 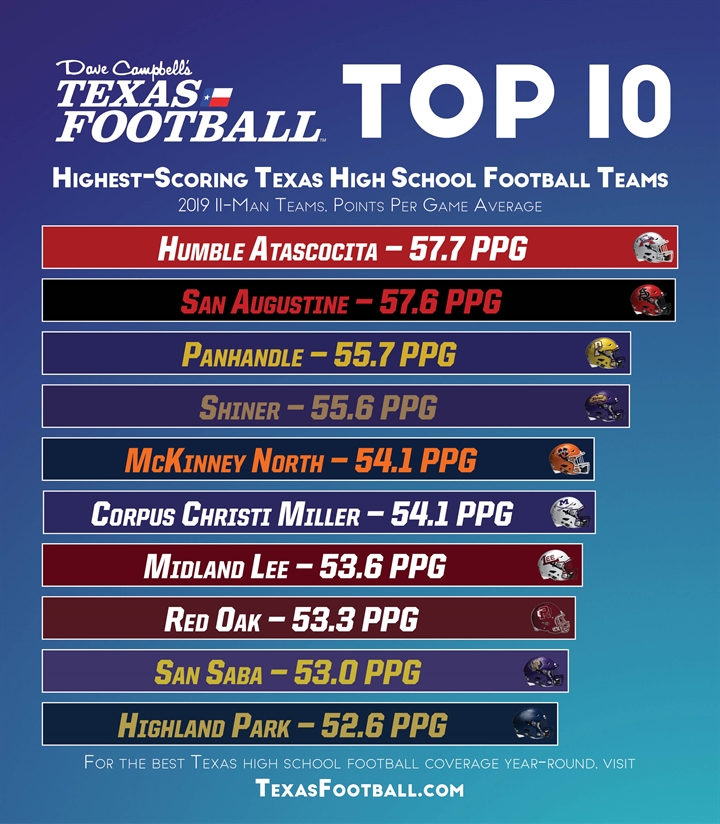 Atascocita put together the highest-scoring 11-man offense in Texas high school football in 2019, averaging a staggering 57.7 points per game en route to a berth in the 6A Division I regional final. As expected, Matthews dazzled at the signal-caller spot, throwing for more than 3,100 yards and 38 touchdowns, and spreading the ball around — four receivers (Robinson, Edmonds, AJ Bobb and Landon King) each topped the 600-yard plateau. The Eagles were held under 42 points just once all year — a 56-14 loss to Katy — and if you were to remove that game, the Eagles' offensive output spikes to nearly 60 points per contest.

The Eagles edged out 2A power San Augustine for the top honors this year, as the Wolves averaged 57.6 points per game this year. Coach Marty Murr's squad did the majority of its damage on the ground — Kevorian Barnes and Tijay Thomas-Davis combined to 3,344 yards and 45 touchdowns rushing — but don't forget quarterback Jayden Hicks, who added a dangerous passing element with more than 2,000 yards and 32 touchdowns passing.