We count down the best performances by Texan players in the state this weekend.

Duffey, who came into the year as a third-string quarterback, starred in Texas Tech’s win over Oklahoma State. He looked more comfortable in the pocket and dealing with pressure than last season, and finished with 424 pass yards and all of Texas Tech’s five total touchdowns in a 45-35 win over a ranked opponent.

We’ve been waiting anxiously for someone – anyone – to step up on UTSA’s offense, especially with Frank Harris out for a while. The San Antonio kid McCormick had his breakout moment against UTEP, rushing for 189 yards and a touchdown on just 22 carries. McCormick has been solid on year, but Saturday proved he can be a centerpiece.

Is it safe to officially name Proche the best receiver in Texas? He held a masterclass with 11 catches for 153 yards and two touchdowns against Tulsa. The biggest of his career came in triple-overtime, as Proche managed to miraculously get a single toe inbounds to win the game in walkoff fashion.

The Red Raiders have been shuffling offensive linemen all season because of injury and inexperience. On Saturday, it was revealed that top guard Jack Anderson will miss the rest of the year. But in a big spot, Texas Tech managed to hold Oklahoma State to just one sack, and clear the way for 162 rushing yards.

Johnson was brought to Texas as a quarterback, but it’s quickly becoming clear that it doesn’t matter in the slightest what position he plays. With virtually every other running back hurt, Johnson stepped in and ran for 121 yards to keep the ball moving against West Virginia. The Longhorns desperately needed to keep the chains moving against WVU, and Johnson made it happen. 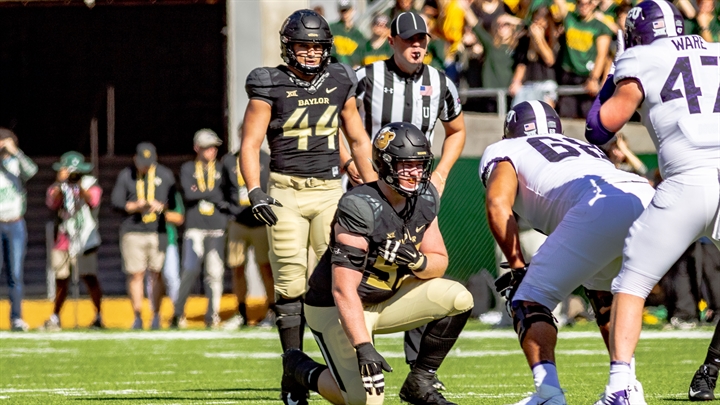 Lynch usually dominates games without recording big stats, but we suppose he was tired of that this week. Against Kansas State, he exploded for four tackles for loss, three sacks and a forced fumble. He and nose tackle Bravvion Roy’s effort helped lead one of the best defensive performances in recent memory for Baylor.

Brooks did everything for Texas Tech on Saturday, finishing with 19 tackles, four tackles for loss and three sacks. He was the clear best player on a field that also included Chuba Hubbard and Tylan Wallace. What more can you ask for?

The offense will get credit for getting SMU back into the game against Tulsa, but Johnson’s two interceptions off Zach Smith were critical, as both came on the SMU side of the field and helped keep points off the board.

Allredge is quietly having a fantastic season, and he showed it against UAB with 11 tackles and 3.5 tackles for loss. The Rice defense as a whole showed some uncharacteristic holes, but Allredge continued to be perhaps the brightest spot.

In a game where every point mattered, Duplessis’s performance stood strong. He nailed a chip shot in the second quarter to give the Roadrunners a two-score lead. Later in the fourth, he hit a big 43-yard field goal, again to give UTSA a two-score lead. His solid kicking – along with a performance 3-for-3 on extra points – helped get UTSA back in the win column.